2016 was a year of big ups and some tremendous downs.

Here’s a few of the highlights…

1099’s/Taxes – Always a big lift off the shoulders when the taxes are done and Uncle Sam is happy.
Jam w/Bonerama – Sitting in with one of our favorite bands, Bonerama at Knucklehead’s on their Midwest run. Craig and the boys always make me feel at home with some Zeppelin. boneramabrass.com 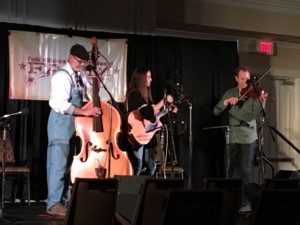 Shows with Under the Big Oak – ‘Twas an honor to be included in so many of the CD release events (and be on the record) with our friends UTBOT.

Folk Alliance International Conference – Was an inspiring event in KC. So many great players and everyone is walking around with instruments on their backs and jamming all night long. Kind of hard on the sleeping routine but worth it! Can’t wait for this year.

JHS Wah wahs, amps, guitar fix – Got of lots of equipment work done to beef up pedals and amps. Even had the neck repaired on my Les Paul. Thanks to JHS, Scarlett Amplification and Seuf guitars for doing such great work for us.

Voodoo gigs – It’s always a great time working at the Voodoo Lounge. We got some amazing pictures and a live recording that will be out this year for Soca Jukebox.

Bill’s second-line memorial. It was a real blessing to know Bill. An honor to be able to play at his memorial. I will never forget this tribute to a great man and taking him out of the church with a genuine, New Orleans’ second-line. It was a real celebration.
MtM record release

Blish Mize success – This was a truly memorable party! Our friends at Blish Mize invited Soca Jukebox to be a part of their annual convention in KC. A greater group of people you will not find to play for or with. Conventions can be a little boring sometimes. These great folks participated “HARD” with us. I think we made some memories and some new friends. Sincere thanks to Blish and co. 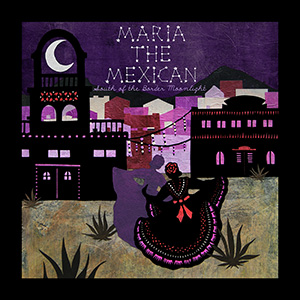 Maria the Mexican – released their second record, “South of the Border Moonlight” with amazing album art from Angie Pickman. ruralpearl.com

Brinnon and Marks Show – The ALS benefit show for the Scott Coates family was truly memorable. Great to share the stage with our friends Brinnon and Marks who put the whole event together at the historic Missouri Theater. Really fun to play the Soca show in that space to a capacity audience.

Jack Pearson Guitar Academy – Jack is just the greatest. I try to get in front of his website a little everyday. It’s the one thing in recent years that’s had the biggest effect on my playing. Hopefully, it will keep rubbing off on me.

Tedeschi Trucks show – This one was one just for us. Derek is one of the great guitar players around and the band with his wife, the great Susan Tedeschi is our kind of jam.

Next to Normal Show – Once in a while I get to do a musical theater thing. It’s something I really enjoy doing. This was a new show to me but it had lots of great music, fun guitar parts and an amazing cast. 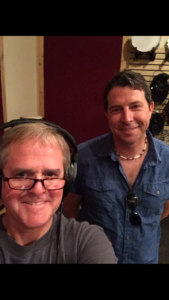 Shawn consults – Strategizing with Shawn Minter about a new record was a big event in ’16. We spent a lot of time choosing and arranging the music, time on the road to Awestruck Studios and in recording. The album will be out this year and is one of the best records I’ve ever been a part of.

Gig w/Rod Fleeman and Craig – KC-based Jazz guitarist, Rod Fleeman was my teacher, mentor and friend. It was amazing to have him join the trio for one super-fun set. That’s a rarity around here. Very inspiring. 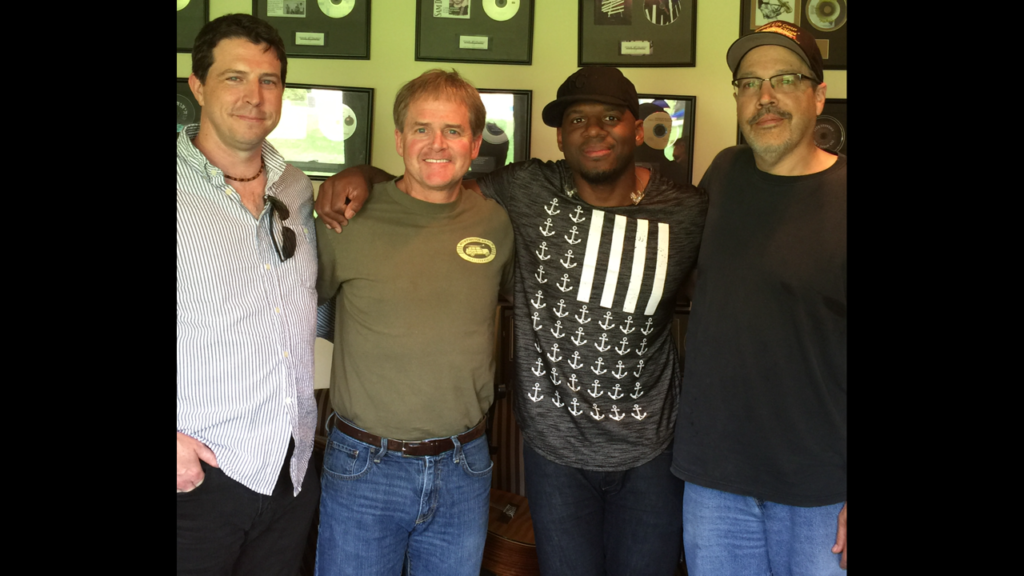 Shawn Recording Rhythm – The initial tracking session for the Shawn Minter project were a real blast. We truly put together a dream team in Lester Estelle, Jr., Craig Kew, Larry Gann, Shawn and his family.

Great month of May. Always good to be busy. There’s that “idle hands” business.

Branson w/family – We’ve been going to Branson MO for family getaways my whole life. It’s awesome to be able to take our own family and still share it with the grandparents.

Carvers Healthy – My in-laws had big health struggles in 2016 which was hard on all concerned. We had a lot of ups and down, in and outs of hospitals, ICU’s and assisted living. Just when we thought we could see the break in the clouds another storm would begin. Eventually, we did bring Mom and Dad Carver home. 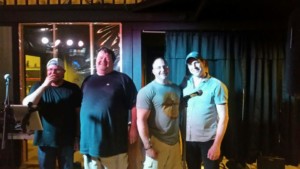 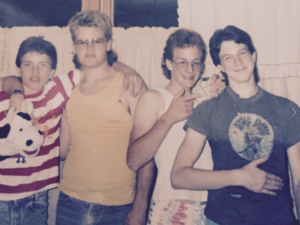 Ed, Jason, Chris and Mike! – 4/5ths of our original band in from Tarkio High School reuniting in our home town. This was a first for us in HMMM years and not even close to the first time we’ve had this much fun together. It was one for the record books though. It’s nice to have a friend. It’s a blessing to call these guys my friends. I owe them a lot. They are truly brothers from other mothers.

Hootenanny ’16 – Our annual Egel-ver Car-hoff production on the beaches of Gulf Shore Alabama. It’s very selective. Invitation only. Only the best people, the best food and the best music.

Hardees/Carl’s Jr. – Soca Jukebox has been a return entertainer for our good friends with Tri-star Ventures who through a remarkable party every year for their close knit family of employees (and their families). We are making memories through great times and good friends.

Summer of Carver Hospital – Grateful for all the kindness and care our family received from a cast of wonderful health professionals and our dearest friends. Hospitals are never any fun. I propose you stay out of them if you can. But please visit when you need to.

Six Degrees West (Epic Fail) – I thought I might be invited to join a new band which is always exciting. Any chance to play with Tim Huggins or Charles Stone is something I’ll say “YES” to. Wrong timing maybe. You win some, you lose some and sometimes you are rained out. Thanks for a crack at it, guys.

Tour of the Corn – Soca Jukebox hits the road every august for the annual “Tour of the Corn”. It’s our homage to being a land-locked, Caribbean steel pan band in the middle of America. A few days on the road to check in on the agricultural yield and friends in the corn belt or Nebraska, Kansas, Iowa and might MO. 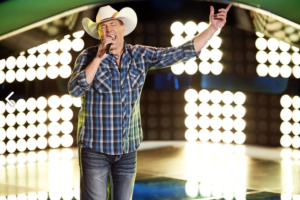 Labor day weekend – We showed some real hustle for the Labor day holiday weekend that included shows with Soca at the Argosy Casino, Benedictine College and the our annual show at the HI-HO. I even played a show with Matt Snook and some of my favorite musicians including Craig Kew, Dave Autry and Angie Larson! Thanks for letting me play, guys.

Being with Diana for transition – We lost a great lady in this life. It was a true honor to be with my mom-in-law, her daughters and husband during her transition. She was a friend, an encourager and a true soul-mate. I owe this lady a lot. It was a blessing to know her and to be a part of her family.

FARM conference – I attended the Folk Alliance Regional Midwest conference in IA city in late October. I made a quick trip very last minute to participate as a volunteer. Great decision and a great personal experience. Very inspiring to meet and hear so many creative musicians from our region. 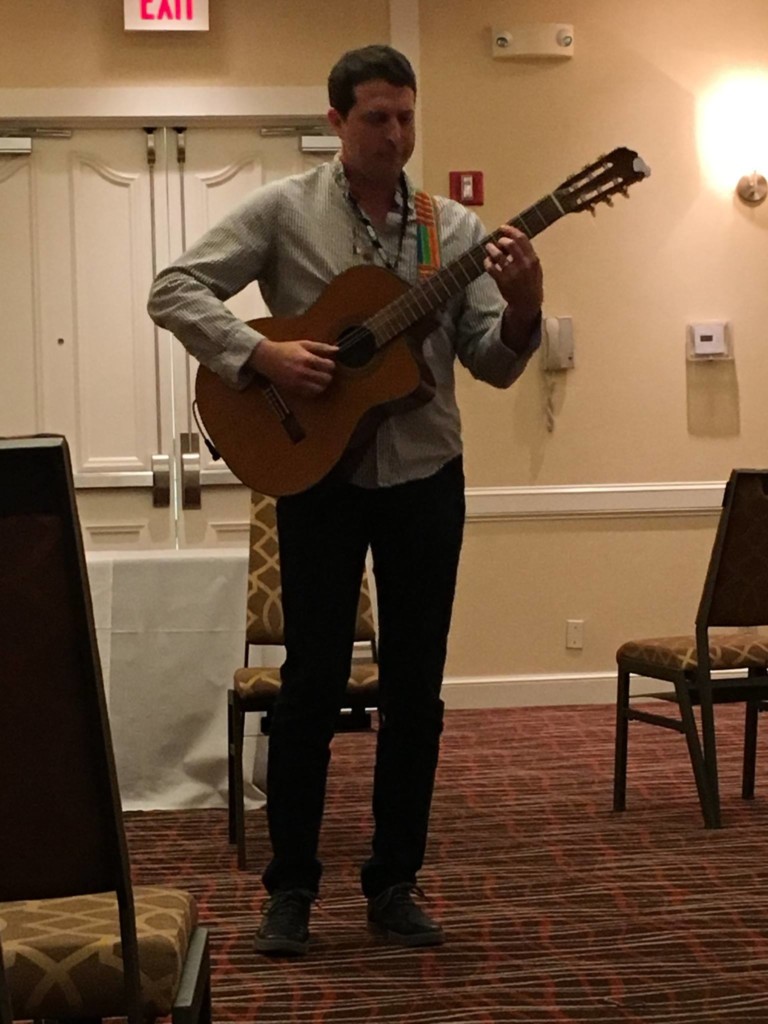 Indianapolis/Hannibal – Another couple of firsts. I got an invitation from our friends at the Angus Foundation to perform for them at their supporter recognition dinner in Indianapolis. First time there and I had to track down the Wes Montgomery Park! Thank you, Angus Foundation (and Wes!). I stopped at the Mark Twain Brewing Co. in Hannibal MO on my way back home. I met so many really nice people there on my first trip and can’t wait to go back.

Never marry a railroad man – This is a recording session we did and a great choice for the Maria the Mexican crew. A cover of the obscure Shocking Blue tune featuring some amazing players and a fine arrangement due out in 2017.

Standing Rock event with Roddy – The peaceful protest to protect the rights of Native Americans, their lands and to preserve the waterways and natural resources was a big story in ’16. It was a real honor to join my own hometown hero, amazing musician and friend, Roddy Barnes as he made his way to Standing Rock to donate time, money and energy to this important cause. 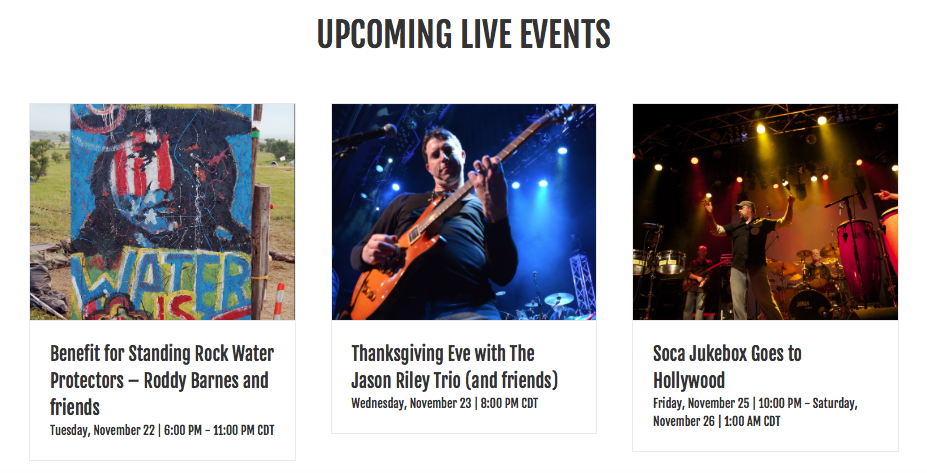 Trio on Thanksgiving EVE – We don’t do the trio thing too much these days. Quite frankly, it’s kind of hard on me. This was a great night, pre-thanksgiving show with lots of friends. We even got Mark back to set in for a couple of tunes. Big thanks to Magoon’s, Craig and Kent Burnham for being the Larry and Moe to my Curly.

Big Christmas Party – Great ending to the year with the original JR Trio with Mark home for the holidays and Craig (simply home). So lucky to get these guys together for an ever great time, every time.

2016 was a year filled with celebration and tears. I’m not sad to see it go. It has been a year that I won’t forget. Some years are like that. This one had a lot of firsts and lasts.

Sincere thanks to the great musicians, bookers, agents, festivals, sound men, venues, students, administrative staff, families and friends that have held us up all along the path this year.

Here’s to the best 2017 you can hope for. Let’s get together (and feel alright).