Great Gifts for Grandma (and grandchildren) 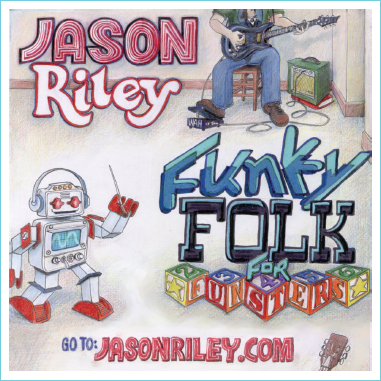 FUNKY FOLK is a musical “theme park” with arrangements of time-honored children’s folk songs that explore classical, jazz, blues, new age, bluegrass, latin, folk and funk.  The music feels as if it was created in a free and friendly, living room hootenanny by a groove-oriented cast of Funky Funsters.  Each tune on the album was constructed from single-take improvisations on a pre-determined form, style and main theme.  The results retain the playful, grooving spirit of an organic process of joyful creation.  Multi-tracked guitars, percussion, banjo, mandolin, hand clapping, body thumping, lap steel, guitar synth and a little harmonica create a unique texture where acoustic folk meets old-school beats.

FUNKY FOLK was recorded in evolving phases from Riley’s home studio to collaborations in pre- and post-production.  Bassist Craig Kew adds a funky vibe throughout and Fresh Cut Grass fiddler, Terry Brock is featured on a couple of tracks.  Musician/technician, Mark Elting, participated fully on many levels of pre-production including engineering, mixing, editing and sequencing.  Post-production mixing was handled by Matthew Russo and mastering by Larry Gann at Awestruck Studios in Kansas City, MO.  Original album art was commissioned from artist Colby Walter and Lawrence Schildnecht at I Mean We, inc. handled all graphic design duties.

The original album artwork has a funky, folk-art vibe and includes nods to classic funk icons Bootsy Collins and Herbie Hancock, Romance era composers Listz and Dvorak, as well as playroom favorites such as Fisher-Price figurines.  “Colby created a sublime combination of childhood play and musical play which is inspired and plain fun.” Riley says.

FUNKY FOLK seems to come from the guitarist’s role as a “playing” parent.  Since becoming a Dad in 2003, Riley has had plenty of time to get in-tune with his inner juvenile and revisit these classic tunes with his own kids.  He’s been balancing “world’s greatest dad” with his performance and recording schedule with other artists in jazz, country, rock, reggae and classical prog.

InnerThump Records declares “the instrumental versions of the family classics presented on FUNKY FOLK allow the listener to relate to these pieces in a purely musical way.  Riley’s interpretations have updated and rejuvenated a collection of music that had been considered old-fashioned and neglected in today’s culture.  FUNKY FOLK blends classic repertoire and modern sensibility in a way that’s sure enthrall kids, parents, friends, family and funky folk everywhere.”

FUNKY FOLK is available on CD and by digital download around the globe via the world wide web at places like iTunes, Amazon, Cdbaby and jasonriley.com.  You can download the entire album or select individual tracks or “fun-size” singles.  You can “LIKE” FUNKY FOLK on Facebook, “FRIEND”  Jason Riley there and listen to the album for free at the artist’s website.  The album is poised for wide-release starting January 28, 2011 and can be found at participating book, music, family and gift stores.  Watch for Jason Riley and his Funky Funk-tions to visit your area in 2011.

For more information on Jason and his music please write to info@jasonriley.com or visit the artist’s website http://www.jasonriley.com.

“...WARNING! (Funky Folk) will most assuredly cause unintended toe tapping and finger snapping. Please be sure you are in a rhythm friendly space before listening.” – The Regular Joe

“If you’re looking for music that you and your kids can both enjoy, then this CD is for you.” – KC Parent Magazine

“The cumulative effect (of the song selection) is one of separate strands entwining to create a beautiful whole – which is what music is really about in the first place, isn’t it?” – Dadnabbit.com

“Anyone who hasn’t heard this album needs to run right out and buy it. I’ve been privileged to have an advance copy and play it all the time. It is Fantastically FUNKY and wonderful. Thanks, Jason!!” – Sandy, a grandma

“My kids at school love this one! I sometimes let them listen to the CD when they are working. They don’t get much work done with this one, though! Too much toe-tapping! lol” – Rae Lynn, 2nd grade teacher

“I don’t know how many artists could take a bunch of children’s songs and turn them into an album that anyone would enjoy, regardless of age. I was one of the lucky few to get a pre-release copy and I absolutely love it.” – Andrew, a dad